Evidence for the Resurrection: The Transformation of Jesus' Opponents 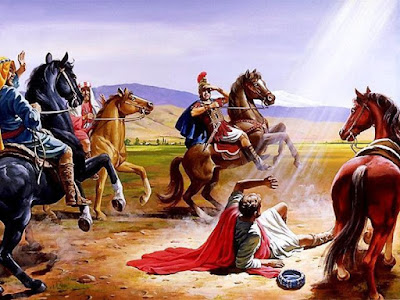 One could potentially develop a theory to explain how Jesus’ disciples could have fabricated or imagined the post-resurrection appearances. Perhaps, in a state of emotional distress, they had hallucinations that they mistook for reality. Maybe they hastily believed rumors of his resurrection because they were still holding onto hope in their hearts that Jesus was the Messiah, or perhaps they just fabricated the whole thing. Such speculation is why the next historical bedrock fact is so important. The previously mentioned theories may work with Jesus’ followers, though they still fail for reasons that I will discuss in the conclusion of this series, but they completely fall flat with his skeptics and enemies who later became his followers. Today, we are going to look at the transformation of two people who had no incentive to preach that Jesus had risen, unless they were reporting what they had actually seen.

We start with Jesus’ own younger brother, James (see Matthew 13:55-56 and Mark 6:3 for identification in the gospels). Along with the rest of his family, James’ was skeptical of Jesus’ messianic ministry and his claim to be the Son of God. While he was ministering from house to house, Jesus’ family “went to take charge of him, for they said, ‘He is out of his mind.’” (Mark 3:21). Later, Jesus’ brothers almost mockingly encouraged him to go to Jerusalem to perform miracles at the Jewish Feast of Tabernacles, but in reality, “even his own brothers did not believe in him.” (John 7:5). I think that it seems pretty intuitive that Jesus’ brothers would be skeptical of his claims. After all, would you believe that your sibling was the Son of God?

However, after Jesus’ death and reported resurrection, Jesus’ mother and brothers “joined together constantly in prayer” with his other followers (Acts 1:14). James became a leader in the early church, giving a speech at the important Council of Jerusalem, which stated that Gentile Christians did not need to be circumcised (Acts 15:12-21). The Apostle Paul also acknowledged that he traveled to Jerusalem a few years after his conversion and saw “James, the Lord’s brother.” (Galatians 1:19). James even wrote the Book of James, where he identifies himself as “a servant of God and of the Lord Jesus Christ.” (James 1:1).

What could cause this radical transformation? It seems like a reasonable response if the early church creed from 1 Corinthians 15 is correct: “[Jesus] was buried,… he was raised on the third day according to the Scriptures…Then he appeared to James.” (1 Corinthians 15:4,7).

James went on to prove the sincerity of this transformation by dying for his belief in the risen Christ, likely around 62 A.D. James’ death is attested to by the Jewish historian Josephus in an account that, unlike another passage we examined, is not contested. It is also important to note that this report of James’ martyrdom came from a non-Christian source, only strengthening its reliability.

“Festus was now dead, and Albinus was but upon the road; so he assembled the Sanhedrin of judges, and brought before them the brother of Jesus, who was called Christ, whose name was James, and some others, [or, some of his companions]; and when he had formed an accusation against them as breakers of the law, he delivered them to be stoned.”1

James’ death is further attested to in Eusebius' Ecclesiastical History (Book 2, 23:8-18) and The First Apocalypse of James. You can check these out on your own if you would like to dig further.

While James’ transformation from skeptic to believer was dramatic, the Apostle Paul’s sudden change from a staunch enemy of the early church to arguably the greatest missionary in church history is even more astounding. Known as Saul before his conversion, he was a leader in the stoning of Stephen, the first Christian martyr (Acts 7:56-57), and tried to “destroy the church” by “going from house to house, [dragging] off men and women and putting them in prison.” (Acts 8:3). Looking back on this period of his life, Paul lamented that he “[did] not even deserve to be called an apostle, because [he] persecuted the church of God.” (1 Corinthians 15:9). Being very zealous in his persecution of the church and observance of the law, Saul the Pharisee held an honored spot in Jewish society (Philippians 3:5-6).

Yet, something happened that indisputably turned Paul’s life upside down. Later, speaking before a crown in Jerusalem, Paul described the event in his own words:

“About noon as I came near Damascus, suddenly a bright light from heaven flashed around me.

I fell to the ground and heard a voice say to me, ‘Saul! Saul! Why do you persecute me?’

‘I am Jesus of Nazareth, whom you are persecuting,’ he replied. My companions saw the light, but they did not understand the voice of him who was speaking to me.

‘Get up,’ the Lord said, ‘and go into Damascus. There you will be told all that you have been assigned to do.’ My companions led me by the hand into Damascus, because the brilliance of the light had blinded me.” (Acts 22:6-11)

If there is any doubt that Paul considered this to be a post-resurrection appearance, and not just a vision or hallucination, he added his name to the list of eye-witnesses of the resurrection in the early church creed that we have already discussed: “Last of all he appeared to me also, as to one abnormally born.” (1 Corinthians 15:8).

As a result, Paul’s life was radically changed. Instead of trying to destroy the church he became completely devoted to spreading the good news of resurrection of Jesus. Experiencing a total change in heart, he claimed, “I consider my life worth nothing to me; my only aim is to finish the race and complete the task the Lord Jesus has given me—the task of testifying to the good news of God’s grace.” (Acts 20:24). He proved these words true by enduring hardships, troubles, beatings, floggings, imprisonments, shipwrecks, sleepless nights, threats from all sides, and hunger for the sake of the gospel (2 Corinthians 6:4-5, 11:23-28). In the end, he paid the ultimate price by sacrificing his life as a martyr.

Tradition holds that Paul was beheaded during the reign of Emperor Nero (64 – 67 A.D.). While imprisoned in Rome, he hints at his impending death, writing, “I am already being poured out like a drink offering, and the time for my departure is near. I have fought the good fight, I have finished the race, I have kept the faith.” (2 Timothy 4:6-7). Paul’s death is reported by Clement of Rome in the early first century:

Through envy Paul, too, showed by example the prize that is given to patience: seven times was he cast into chains; he was banished; he was stoned; having become a herald, both in the East and in the West, he obtained the noble renown due to his faith; and having preached righteousness to the whole world, and having come to the extremity of the West, and having borne witness before rulers, he departed at length out of the world, and went to the holy place, having become the greatest example of patience.2

If you are interested, you can examine further reports of Paul’s martyrdom in Ignatius’s Letter to the Ephesians (12:2), Polycarp’s Letter of the Philippians (9:1-2), Eusebius’ Ecclesiastical History (Book 2,25:4), Tertullian’s Scorpiace (15:5-6), and Irenaeus’ Against Heresies (Book 3,1:1).

The record of history seems clear, both James and Paul were initially in a position of either skepticism or opposition to Jesus’ claim to be the Messiah. However, their lives were radically transformed to the point of being willing to lay them down for the message that Jesus had risen from the grave, confirming his identity as the Son of God and the efficacy of his death for the forgiveness of sins. Theories of fabrication, conspiracy, and wishful thinking simply won’t work to explain the historical transformation of these men. They were predisposed against the idea that Jesus would rise from the dead. In Paul’s case, he enjoyed a privileged position in Jewish society, and suffered tremendous loss in preaching the gospel and Christ’s resurrection. What could motivate both of these men to completely reverse position and give their lives to serve Jesus, with no logical explanation of ulterior motive? I see no other logical explanation than what is offered in 1 Corinthians 15 – “Then he appeared to James, then to all the apostles, and last of all he appeared to me (Paul) also, as to one abnormally born.” (1 Corinthians 15:7-8).

2)    Clement of Rome, The First Epistle of Clement to the Corinthians, 5:5-7, Retrieved from http://www.earlychristianwritings.com/text/1clement-hoole.html
Posted by Justin Kuk at 10:39 AM