Evidence for the Resurrection: The Transformation of the Disciples 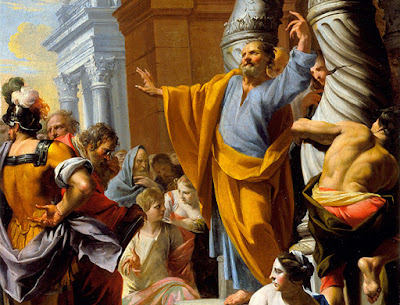 In the last two posts, I argued that there is sufficient evidence to assert that Jesus died by crucifixion and that his followers had real experiences that they interpreted to be the risen Jesus. We now continue with the third historical bedrock fact, that Jesus’ followers were transformed as a result of their post-resurrection experiences, even to the point of being willing to die for their faith in the resurrection. The New Testament clearly illustrates a radical change in the disciples that occurred after their claim to have seen the risen Jesus. If you are skeptical of this data, I would encourage you to first read my post on the historical reliability of the New Testament before continuing with this post.

Prior to Jesus’ crucifixion, the disciples were not expecting the Messiah to die, let alone rise from the dead. After recognizing that he was the Christ, Peter rebuked Jesus for predicting his death and resurrection (Matthew 16:21-23, Mark 9:31-33). Elsewhere, the disciples didn’t even understand Jesus’ clear prediction that he would die and rise again (Luke 9:45, 19:31-34). Furthermore, the disciples fled out of fear when Jesus was arrested and Peter denied Jesus three times while he was on trial before the Jewish leaders (Matthew 26:29-75, Mark 14:66-72, Luke 22:54-62, John 18:15-18, 25:27). While we tend to focus on Peter’s denial, the other disciples failed to live up to their promise to follow him unto death if necessary (Matthew 26:35, Mark 14:31). The picture that we have before the resurrection is of a group of men that didn’t understand Jesus’ teachings on the crucifixion and resurrection and failed in the hour of greatest pressure for fear of their own safety. Due to the criterion of embarrassment, there is no reason to believe that these details were fabricated.

After the disciples’ claimed post-resurrection experiences, their behavior was radically transformed as they fearlessly proclaimed the gospel around the known world. Very soon after the crucifixion, they were preaching in the streets of Jerusalem that Jesus had risen from the dead (Acts 2:14-41, Acts 3:12-26). This is the same city where Jesus was crucified, where the religious leaders would certainly want to punish those carrying on his influence. When pressured by these leaders, the disciples spoke boldly and refused to stop preaching the gospel (Acts 4:1-21). Despite facing persecution (Acts 8:1-3) and imprisonment (Acts 5:17-42), the disciples preached the gospel wherever they went (Acts 8:4) and lived a lifestyle of radical generosity (Acts 2:42-47, Acts 4:32-37). Peter and John’s comments before the Sanhedrin when ordered to stop speaking in the name of Jesus sum up the transformation that occurred in these men.

“Judge for yourselves whether it is right in God’s sight to obey you rather than God. For we cannot help speaking about what we have seen and heard.” (Acts 4:19-20)

The disciples’ willingness to face suffering and persecution for the sake of the gospel message is confirmed in other books of the New Testament. Peter writes to the church to encourage Christians to “rejoice that [they] participate in the sufferings of Christ” (1 Peter 4:12) and that they should not be ashamed to suffer as Christians, but should “praise God that [they] bear that name.” (1 Peter 4:16). In the book of Revelation, John identified himself as “your brother and companion in the suffering and kingdom and patient endurance that are ours in Jesus” and explains that he “was on the island of Patmos (in exile) because of the word of God and the testimony of Jesus.” (Revelation 1:9). It is clear that the disciples were no longer a fearful band of deserters, but willing to suffer for their testimony that Jesus was the risen Lord.

Early extra-biblical sources confirm that Jesus’ followers faced persecution for their faith, which centered on the resurrection. In a passage that has been cited in previous posts, the historian Tacitus described Emperor Nero’s treatment of Christians after the Great Fire of Rome in 64 A.D.

“Nero fastened the guilt and inflicted the most exquisite tortures on a class hated for their abominations, called Christians by the populace.”1

Another Roman historian, Suetonius, confirms the persecution of Christians under Nero and also describes their harsh treatment under Emperor Claudius, who reigned from 41 – 54 A.D., in the first decades after the claimed resurrection.

“Because the Jews at Rome caused constant disturbances at the instigation of Chrestus (Christ), he (Claudius) expelled them from the city (Rome).”2

“Nero inflicted punishment on the Christians, a sect given to a new and mischievous religious belief.”3


Beyond this evidence of a general atmosphere of persecution, there is evidence that the disciples were willing to face death for proclaiming that Jesus had risen from the dead. I have always found the martyrdom of the apostles to be highly compelling evidence for the resurrection. We return to the question, “Would you be willing to die for a lie?” However, a note of clarification is required here. Some might point out that a person’s willingness to die for their beliefs does not prove that their beliefs are true. After all, Muslim jihadists are willing to die to advance the cause of Islam and Buddhist monks are willing to set themselves on fire to protest oppression, yet those worldviews contradict Christianity in important areas. I agree with this objection, except that the apostles were not just dying for a strongly held set of beliefs that had been passed down to them, but for their testimony about what they had seen with their own eyes. If I were to die as a result of preaching the gospel, it would only prove that I sincerely and deeply believed in the Christian message, which ultimately I have received second hand. What they disciples were willing to do is different. They were willing to die for preaching that Jesus had risen from the dead and they were in the position to know whether this was true or false. If Jesus had not risen, they would have died for something they knew was a lie.

According to church history, all the apostles were martyred, except for John, who died in exile on the island of Patmos. There is not enough historical evidence to confirm this tradition, however there is evidence to support the assertion that Peter, Paul, James the brother of Jesus, and James the son of Zebedee were martyred, that Thomas was most probably martyred, and that Andrew may have been martyred.4 The lack of evidence for the other apostles doesn’t mean that they didn't die as martyrs, but that we don’t have sufficient historical data to ultimately determine how they died. However, we do know that there is evidence for a general atmosphere of persecution and that there is no historical evidence that any of the disciples ever recanted of their testimony that Jesus had risen from the dead.

In the next post, I am going to focus on the transformed lives of two of Jesus’ opponents, his brother James and the Apostle Paul, so I am not going to focus on the evidence for their martyrdoms in this post. Instead, I would like to put forward evidence to support that James the son of Zebedee and Peter died for their testimony of the resurrection.

In the book of Acts, the historian Luke writes, “King Herod arrested some who belonged to the church, intending to persecute them. He had James, the brother of John, put to death with the sword.” (Acts 12:1-2). It is believed that James’ death occurred in 44 A.D and James only appears in two later apocryphal writings, Acts of St. James and The Apostolic History of Abdias.5 His absence in other writings suggests that it was established early in church history that James had in fact been killed by the sword.

Peter is believed to have been crucified upside down during the reign of Nero, between 64 – 67 A.D. Interesting circumstantial evidence to support Peter’s death is Jesus’ prediction of this fate:

“‘Very truly I tell you, when you were younger you dressed yourself and went where you wanted; but when you are old you will stretch out your hands, and someone else will dress you and lead you where you do not want to go.’ Jesus said this to indicate the kind of death by which Peter would glorify God.” (John 21:18-19).

The gospel of John is believed to have been written between 70 – 90 A.D., which places it after Peter’s death. Whether you believe that Jesus’ words were prophetically spoken during a post-resurrection appearance or merely invented after the fact, it would be odd to include them if Peter hadn’t actually died as a martyr.

Peter’s death is confirmed by Clement of Rome in The First Epistle of Clement to the Corinthians, likely written in the late first century.

“But let us pass from ancient examples, and come unto those who have in the times nearest to us, wrestled for the faith. Let us take the noble examples of our own generation. Through jealousy and envy the greatest and most just pillars of the Church were persecuted, and came even unto death. Let us place before our eyes the good Apostles. Peter, through unjust envy, endured not one or two but many labours, and at last, having delivered his testimony, departed unto the place of glory due to him.”6


Peter’s martyrdom is further corroborated by Ignatius in his Epistle to the Smyrnaeans, written in the early second century.


For myself, I am convinced and believe that even after the resurrection he was in the flesh. Indeed, when he came to Peter and his friends, he said to them, ‘take hold of me, touch me and see that I am not a bodiless ghost.’ And they at once touched him and were convinced, clutching his body and his very breath. For this reason they despised death itself, and proved its victor.”7

Through several New Testament documents and extra-Biblical sources, we have a clear picture of the transformation of Peter from someone who rebuked Jesus for predicting his death and fearfully denied him during his trial to a bold leader of the early church, who fearlessly proclaimed the resurrection in the face of imprisonment, persecution, and ultimately death. We have good evidence that James son of Zebedee met a similar fate. While we may not know the details of how they died, we have strong evidence that the other disciples were similarly transformed and boldly testified to the resurrection in a hostile environment of general pressure and persecution. Something happened after Jesus’ death to cause this dramatic turn in the disciples. Any theory about what happened after the crucifixion must account for this radical transformation.

2)    Suetonius, Life of Claudius, 25:4, cited in Wallace, J. Warner. “Is there any Evidence for Jesus Outside the Bible?” Retrieved from https://coldcasechristianity.com/writings/is-there-any-evidence-for-jesus-outside-the-bible/

3)    Suetonius, Lives of the Caesars, 26:2, cited in Wallace, J. Warner. “Is there any Evidence for Jesus Outside the Bible?” Retrieved from https://coldcasechristianity.com/writings/is-there-any-evidence-for-jesus-outside-the-bible/

4)    McDowell, Sean. “Did the Apostles Really Die as Martyrs for their Faith?” Retrieved from https://www.oneplace.com/ministries/bible-answer-man/read/articles/did-the-apostles-really-die-as-martyrs-for-their-faith-by-sean-mcdowell-17589.html

6)    Clement of Rome, The First Epistle of Clement to the Corinthians, 5:1-4, Retrieved from http://www.earlychristianwritings.com/text/1clement-hoole.html

7)    Ignatius, Epistle of Ignatius to the Smyrnaeans, 3:1-2, Retrieved from https://www.orderofstignatius.org/files/Letters/Ignatius_to_Smyrnaeans.pdf