Jesus and the Old Testament Series: An Introduction 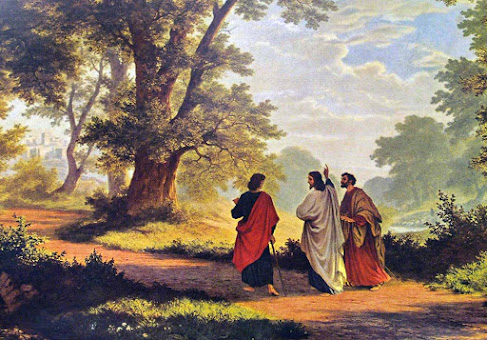 If I could partake in any Bible study throughout history, it most likely would have been the one that took place on the road to Emmaus. On Resurrection Sunday, the risen Jesus joined two of his followers as they travelled to the village of Emmaus. As they chatted, the men were bewildered to learn that their new companion had not heard of the recent happenings in Jerusalem: that Jesus of Nazareth, whom they had hoped was the Messiah, had been delivered by the Jewish leaders to be crucified by Pontius Pilate. Though their expectations had been dashed, that very morning some of women of their company found Jesus’ tomb empty and reported that they had seen him alive. Other disciples investigated their claim and found that the tomb was empty, but Jesus himself, they did not see.

In response to this news flash, “[Jesus] said to them, ‘O foolish ones, and slow of heart to believe all that they prophets have spoken! Was it not necessary that the Christ should suffer these things and enter into his glory?’ And beginning with Moses and all the Prophets, he interpreted to them in all the Scriptures the things concerning himself.” (Luke 24:26-27). What a Bible study that must have been!

Throughout every genre of writing, the New Testament affirms that the entire Bible is a revelation of Jesus Christ. In the gospels, Jesus makes this proclamation multiple times. When the Jews were seeking to kill Jesus because he was making himself equal with God by calling God his own father, Jesus responded:

“You search the Scriptures because you think that in them you have eternal life; and it is they that bear witness about me, yet you refuse to come to me that you may have life…Do not think that I will accuse you to the Father. There is one who accuses you; Moses, on whom you have set your hope. For if you believed Moses, you would believe me; for he wrote of me.” (John 5:39-40, 45-46)

In both this rebuke and the one on the way to Emmaus, Jesus affirms that all “the Scriptures” – from Genesis to Malachi – speak of him. This doesn’t mean that every single verse of the Bible is a foreshadowing or prophecy of Christ, but that we should expect to see a coherent Christological narrative woven throughout the Old Testament.

Jesus clearly viewed himself as the fulfillment of the Old Testament. In the Sermon on the Mount, Jesus says, “Do not think that I have come to abolish the Law or the Prophets; I have not come to abolish them but to fulfill them.” (Matthew 5:17). Elsewhere, after reading a messianic passage from Isaiah in the synagogue in Nazareth, Jesus sat down will all the eyes in the building fixed on him. He broke the suspense by simply stating, “Today, this scripture has been fulfilled in your hearing.” (Luke 4:21).

The preaching of the early church was built upon the foundation that the Old Testament bore witness to Jesus. In the very first public preaching of the gospel, the Apostle Peter quotes extensively from the Old Testament to persuade the crowd that Jesus’ death and resurrection had always been God’s plan of salvation. He makes this more explicit in his next public preaching by proclaiming, “What God foretold by the mouth of all the prophets, that his Christ would suffer, he thus fulfilled…And all the prophets who have spoken, from Samuel and those who came after him, also proclaimed these days.” (Acts 3:18, 24).

Other church leaders used similar tactics. It has the Apostle Paul’s normal custom when travelling to a new city was to enter the Jewish synagogue and reason from the Scriptures to prove that Jesus was the promised Christ and that it was necessary for the Messiah to suffer and rise from the dead (Acts 17:2, 18:4). After hearing such a message from Paul, the Bereans were applauded because they “received the word with all eagerness, examining the Scriptures daily to see if these things were so.” (Acts 17:11).

In sharing one of the earliest creeds of the church, which most scholars agree dates to within three to five years of the resurrection, Paul writes, “For I delivered to you as of first importance what I also received: that Christ died for our sins in accordance with the Scriptures, that he was buried, that he was raised on the third day in accordance with the Scriptures, that that he appeared to Cephas, then to the twelve. Then he appeared to more than five hundred brothers at one time, most of whom are still alive, though some have fallen asleep. Then he appeared to James, then to all the apostles. Last of all, as to one untimely born, he appeared also to me.” (1 Corinthians 15:3-8, emphasis added).

The message of the New Testament is clear – Jesus is all over the Old Testament. Yet, one may wonder, why does this subject warrant the attention of an entire series? I would argue that this area of study is one that has been somewhat neglected by the church and possesses great value in discipleship, outreach, and personal devotion.

I consider the rich and pervasive foreshadowing of Jesus in the Old Testament to be one of the strongest apologetic defenses of the truthfulness of Christianity and the reliability of Scripture. The Old Testament was written by dozens of authors over a period of more than a thousand years, yet, as we will see in this series, these writings contain amazing coherence and diversity in the way Jesus is interwoven into the text. Jesus will by foreshadowed or “typed” through people, events, religious ceremonies, and direct prophecy. Passages that we often skim through or skip altogether, such as the description of the priestly garments, will powerfully point to Christ.

I see three possible explanations for this coherency throughout Scripture: pure coincidence, deliberate and brilliant deception, or intentional revelation. Through the depth and variety of examples that will be provided, I hope to diminish the likelihood of mere coincidence to an asymptote of zero. The hypothesis that the New Testament authors intentionally created a legendary Jesus figure to fit Messianic foreshadows or types from the Old Testament has several problems. First, it goes against the mockery of pop-atheism that tries to discredit Scripture by claiming that it was written by illiterate goat herders and fisherman. You can’t question the reliability of the New Testament Scriptures on one-hand by questioning the qualification of the authors and then turn around and claim that the same authors skillfully crafted a legendary figure to fulfill existing Scripture in a plethora of ways. Second, there are some known facts about Jesus’ life and death that the New Testament authors could not have concocted, even if their motive was duplicitous. Third, the New Testament writings attest to a concern for truth and integrity that would seem at odds with a devious scheme of fabrication. Finally, the New Testament authors faced extreme persecution and even death for their testimony of Christ’s life, death, and resurrection. While one’s willingness to die for what they believe only proves that they are sincere, the disciple’s willingness to die for that “which [they] have heard, which [they] have seen with [their] own eyes, [and] which [they] have looked upon and have touched with [their] own hands” (1 John 1:1) supports the theory that they were truthfully reporting real events and vastly undermines the hypothesis of literary invention.

This leaves the explanation that God purposefully and sovereignly embedded these foreshadows of Jesus within the Old Testament writings. Yet, how many Christians have considered these deep truths of the faith? According to a Pew Research study, the number of millennials who identified as Christian dropped by 16% from 2009 to 2019. I wonder how many of these Christians who left the faith could identify even one way that Jesus is foreshadowed in the Old Testament, let alone the vast array of types of prophecies that this series will offer. Maybe if youth groups and churches had sought to instill a deep understanding of the breadth of Scripture, instead of primarily seeking to entertain and rarely scratching below the surface message that “Jesus loves you”, more millennials would have remained strongly rooted in the faith when encountered with skeptical objections, cultural pressures, and even the shortcomings of the church, itself.

Furthermore, I find that the comprehensive foreshadowing of Jesus in the Old Testament has great potential in outreach to unbelievers. I don’t try to conceal or apologize for the fact that I hope to persuade others by writing this blog. Though I hope to accomplish other purposes, such as building up the church, I do hope to convince others of the truth of Christianity. If you do not believe in Christ, I would invite you to read this series with an open mind and consider what is the best explanation for the coherent and interwoven image of Jesus that appears throughout the Old Testament. If you are a believer, I would challenge you to share these ideas with your family and friends. If one really digs into revelation of Jesus in the Old Testament scriptures, I think they will find truths that are difficult to dismiss or explain away.

Finally, I believe that they study of Jesus in the Old Testament has great potential to enrich the devotional lives of Christians. Paul closes his letter to the Roman church with this doxology: “Now to him who is able to strengthen you according to my gospel and the preaching of Jesus Christ, according to the revelation of the mystery that was kept secret for long ages but has now been disclosed and through the prophetic writings has been made known to all nations, according to the command of the eternal God, to bring about the obedience of faith – to the only wise God be glory forevermore through Jesus Christ! Amen.” (Romans 16:25-27, emphasis added).

Paul’s implication is clear. Before Jesus, the Old Testament was not fully understood, but now these mysteries have been disclosed not only through the life, death, and resurrection of Jesus, but through the writings themselves. In other words, using what we know about Jesus’ life, ministry and ultimate purpose, we can return to fully understand the mysteries contained in the Old Testament scriptures. In doing so, we will more fully understand and savor God’s eternal plan of salvation and the beauty and majesty of Christ that is revealed throughout Scripture. According to Westminster Catechism, the chief end of man is to “glorify God and enjoy him forever.” Seeing Jesus in the Old Testament will enable us to accomplish both of these ends – glorifying God for his manifest wisdom in weaving the message of salvation through Christ throughout the Old Testament and enjoying the many ways in which mystery of Christ has been revealed to us. Regardless of any apologetic effectiveness, I consider these benefits alone to be good reasons to seek to find Jesus in the Old Testament. So, let the search begin!

Email ThisBlogThis!Share to TwitterShare to FacebookShare to Pinterest
Labels: Apologetics, Jesus in the Old Testament