Jesus and the Old Testament: Abraham Called to Sacrifice Isaac 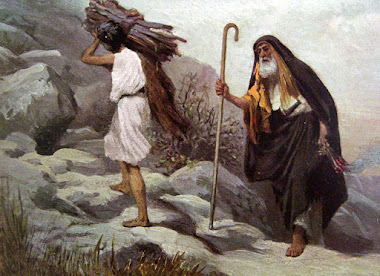 As we work through this series on Jesus in the Old Testament, we will encounter a few principles that can help us to identify foreshadowings or “types” of Christ in the Old Testament. These types will include events, people, inanimate objects, and clothing, among others. Sometimes, when reading a passage, we will ask ourselves, “What in the world was that about?!?” Those are often great opportunities to look for foreshadowings of Christ’s life, ministry, death, resurrection, and ultimate purpose in God’s plan of salvation. The focus of this post falls into this category.

One of the more startling sections of Scripture is God’s command to Abraham to sacrifice his son, Isaac. Not only is it unsettling to put oneself in Abraham’s shoes, put the command also goes against God’s repeated condemnation of human sacrifice. Before the Israelites entered the Promised Land, the Lord warned them, “You shall not worship the LORD your God [as they worship their gods], for every abominable thing that the LORD hates they have done for their gods, for they even burn their sons and daughters in the fire to their gods.” (Deuteronomy 12:31). Yet, it seems that God is asking Abraham to do the very thing that he abhors.

It is understood from the text that part of the Lord’s purpose was to test Abraham’s devotion, however, when we look at the entire narrative of the Bible it is clear that there is greater purpose being accomplished through this trial. On several points, Abraham’s sacrifice of Isaac, which God ultimately prevented, points strongly to God’s sacrifice of his own Son for the salvation of mankind. If you are not familiar with or need a refreshing of the account, it can be found in Genesis 22:1-19.

The story starts with two astonishing connections to Christ. The Lord said to Abraham, “Take your son, your only son Isaac, whom you love, and go to the land of Moriah, and offer him there as a burnt offering on one of the mountains of which I shall tell you.” (Genesis 22:2). I read this passage numerous times without realizing that the land of Moriah was the future site of the city of Jerusalem. Hundreds of years later, “Solomon began to build the house of the LORD in Jerusalem on Mount Moriah” (2 Chronicles 3:1), and hundreds of years after the days of Solomon, Jesus Christ would be crucified outside the very same city. That Jesus was crucified in Jerusalem is a bedrock historical fact that is agreed upon by a consensus of scholars. That Jesus paid the ultimate sacrifice in the very place where Abraham had been instructed to sacrifice Isaac is either proof of God’s sovereign plan or an amazing coincidence.

Not only is the place selected for Isaac’s sacrifice significant, but the Lord refers to Isaac as Abraham’s “only son.” While it is true that Isaac was the child of the promise through whom God had promised to bless Abraham’s descendant, he was not Abraham’s only son. Abraham had another son, Ishmael, through Hagar, the servant of his wife Sarah. However, when reflecting upon God’s instruction for Abraham to sacrifice his “only son”, one cannot help but think of probably the most famous verse of the New Testament: “For God so loved the world, that he gave his only Son, that whoever believes in him should not perish but have eternal life.” (John 3:16, emphasis added).

With a heavy heart, Abraham started the journey to Moriah the next morning, bringing Isaac, two servants, and a donkey saddled with wood for the sacrifice. With Abraham’s mind set on obeying and trusting God, Isaac was already figuratively dead during this journey, which just so happened to take three days. The book of Hebrews adds to our understanding of Abraham’s mindset by explaining, “He considered that God was able even to raise [Isaac] from the dead, from which, figuratively speaking, he did receive him back.” (Hebrews 11:19). So figuratively speaking, Isaac was dead for three days before being restored to life. Think of the words that the angels spoke to the women when they discovered the empty tomb: “Why do you seek the living among the dead? He is not here, but has risen. Remember how he told you, while he was still in Galilee, that the Son of Man must be delivered into the hands of sinful men and be crucified and on the third day rise.” (Luke 24:5-7). What God represented metaphorically by Isaac’s figurative death and resurrection on the third day, he accomplished literally through the resurrection of Jesus on the same third day.

As Mount Moriah came into view, Abraham instructed his servants to wait, while he and Isaac pushed on alone. During this agonizing last leg of the journey, Isaac carried the wood for the sacrifice while Abraham carried the knife and the fire. Centuries later, God’s own son would carry a wooden cross up the same hill where the Father would pour out his wrath upon the sinfulness of mankind. There are numerous biblical examples in which God’s wrath is symbolized by fire, which Abraham carried up the mountain, including this warning from the prophet Jeremiah: “Circumcise yourselves to the Lord and remove the foreskins of your heart, men of Judah in inhabitants of Jerusalem, or else my wrath will go forth like fire and burn with none to quench it, because of the evil of your deeds.” (Jeremiah 4:4).

As they proceeded up the slopes of Moriah, Isaac questioned why they brought the wood and fire, but no lamb for the sacrifice. Abraham, answered, “God will provide for himself the lamb for a burnt offering, my son.” (Genesis 22:8). Upon seeing this promised sacrifice in Jesus of Nazareth, John the Baptist proclaimed, “Behold, the Lamb of God, who takes away the sin of the world!” (John 1:29). The Apostle Peter declares that we are “ransomed…with the precious blood of Christ, like that of a lamb without blemish or spot.” (1 Peter 1:18-19).

Once they reached the mountain summit, Abraham constructed an altar, bound his son, and laid him upon the altar. The passage does not specify Isaac’s age and the word that is often translated as “boy” or “lad” can be used to represent a wide range of ages, but clues from the text indicate that he was probably at least a young man, since he was strong enough to carry the wood up the mountain. Abraham, on the other hand, was over 100 years old. It seems safe to assume that Isaac could have overpowered his father, if he so desired, but instead trusted his father and willingly submitted to his will. Similarly, as Jesus faced his own sacrifice, he prayed, “Father, if you are willing, remove this cup from me. Nevertheless, not my will, but yours, be done.” (Luke 22:42). Jesus makes clear that “No one takes [my life] from me, but I lay it down of my own accord.” (John 10:18).

At this point, there is a divergence in the two sacrifices, for as Abraham raises his knife the Angel of the Lord intercedes and says, “Do not lay your hand on the boy or do anything to him, for now I know that you fear God, seeing you have not withheld your son, your only son, from me.” (Genesis 22:12). However, God would not stay his own hand in sacrificing Jesus for the sins of the world. “It was the will of the LORD to crush him; he has put him to grief; when his soul makes an offering for guilt, he shall see his offspring; he shall prolong his days; the will of the Lord shall prosper in his hand.” (Isaiah 53:10).

After the Angel of the Lord interceded and Isaac was figuratively raised to life on the third day, Abraham lifted his eyes and saw a ram caught in a thicket. The Lord, had indeed provided the sacrifice, and Abraham offered the ram as a burnt offering instead of his son. Interestingly, Abraham called the name of the place of sacrifice, “The LORD will provide” (Genesis 22:14), not “The LORD did provide.” In fact, at the time when Moses wrote the first five books of the Old Testament, it was still being said by the Israelites that “On the mount of the LORD it shall be provided.” (Genesis 22:14). Therefore, God’s people had an expectation that God himself would provide a future sacrifice in Moriah, the very place where Jesus would be “pierced for [their] transgressions [and] crushed for [their] iniquities.” (Isaiah 53:5).

My mind is absolutely blown. You literally cannot make this stuff up. The connections between Abraham’s test of sacrificing Isaac and God’s final sacrifice of his own Son are too numerous and too powerful to ignore. Which brings us back to my original point. When we see something that is a bit confusing in the Old Testament, we should ask whether God is using this passage to point to Jesus. I believe that God ultimately called Abraham to sacrifice his son in the land of Moriah so that when he sacrificed his own Son on the same hill nearly two millennium later, it would be obvious that this is what he had planned all along.

Email ThisBlogThis!Share to TwitterShare to FacebookShare to Pinterest
Labels: Apologetics, Jesus in the Old Testament