Faith and Evidence in the Old Testament 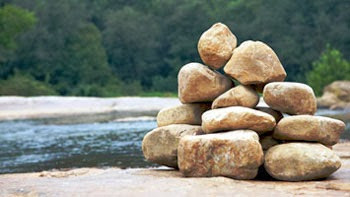 In this series, I am responding to the common assertion from atheists and skeptics that faith is "belief without evidence." If you haven't done so already, I would recommend reading the introduction to this series to properly set the stage for this post.

One thing that is important to note is that the purpose of this series is not to provide or defend evidence for the truthfulness of Christianity. If you are interested in such evidence, I have written an entire series on evidence for the resurrection of Jesus and have plans for future writings on other lines of evidence and reasoning. Instead, this is an internal critique of how the Bible defines faith. Authors such as Peter Boghossian claim that when Christians speak of having "faith" in God, they really mean "things they pretend to know." Yet, regardless of one's own beliefs, it seems vitally important to look at how the Christian worldview defines faith. Does the Bible give the impression that faith is something that should be accepted blindly without any evidence? To keep things manageable, in this post we are only going to be looking at how the Old Testament speaks of faith.
First, let's examine how the term is used in the Old Testament. The number of times that the word "faith" appears depends on the translation. For example, in the English Standard Version, which is on the word-for-word side of the translation scale, a variety of different Hebrew words are translated as "faith" for a total of twenty-seven appearances. In over half of the usages, faith is used in the context of showing or failing to show devotion to God or another person. An example occurs when the rest of the tribes of Israel mistakenly thought that the tribes of Reuben, Gad, and Manasseh erected an altar of rebellion against the Lord.

Thus says the whole congregation of the Lord, ‘What is this breach of faith that you have committed against the God of Israel in turning away this day from following the Lord by building yourselves an altar this day in rebellion against the Lord? (Joshua 22:16)
The next most common context is for faith to be used synomonously with trust or confidence. After being led out of slavery in Egypt and witnessing numerous signs and wonders, the Israelites did not trust that God would lead them to victory in the promised land, but instead "they despised the pleasant land, having no faith in his promise." (Psalm 106:24). Far from being belief with no evidence, the Israelites are condemned for not having faith despite all the evidence they had seen of God's power and might in rescuing them out of Egypt (read Psalm 106:1-23).
Possibly the most famous "faith" verse from the Old Testament is Habakkuk 2:4, which says, "the righteous will live by his faith." In context, the righteous man is contrasted with the man whose "soul is puffed up; it is not upright within him." The contrast doesn't speak to the reasons for the righteous man's faith, but instead how his faith in God impacts the way in which he lives.
Finally, a few other verses speak of acting in "good faith" or with truth and integrity (See Judges 9:15 - 19).
Beyond studying individual word usages, there are larger themes that emerge in the Old Testament that fly completely against the claim that faith is belief without evidence. First, one purpose of prophecy was to provide evidence that the LORD had spoken to Israel. God doesn't instruct the Israelites to blindly trust anyone who claims to be a prophet, but instead tells them to look for evidence of fulfilled prophecy to determine whether they speak for the LORD or not.

And if you say in your heart, ‘How may we know the word that the Lord has not spoken?’— when a prophet speaks in the name of the Lord, if the word does not come to pass or come true, that is a word that the Lord has not spoken; the prophet has spoken it presumptuously. You need not be afraid of him. (Deuteronomy 18:21-22)
Later, God declares to Israel that he has predicted future events through the prophets to provide evidence that he, and not their man-made idols, had brought these things to pass.

The former things I declared of old;
they went out from my mouth, and I announced them;
then suddenly I did them, and they came to pass.

Because I know that you are obstinate,
and your neck is an iron sinew
and your forehead brass,

I declared them to you from of old,
before they came to pass I announced them to you,
lest you should say, "My idol did them,
my carved image and my metal image commanded them." (Isaiah 48:3-5)
Second, the Israelites were taught to remember the things God had done in the past and to pass them on to future generations so that they would also trust in him. Most people know that God parted the Red Sea as the Israelites fled from the Egyptians, but a second water crossing occurred with God stopped the Jordan River so that the Israelites could enter the promised land. As this miracle occurred, Joshua gave the following instructions:
“Go over before the ark of the Lord your God into the middle of the Jordan. Each of you is to take up a stone on his shoulder, according to the number of the tribes of the Israelites, to serve as a sign among you. In the future, when your children ask you, ‘What do these stones mean?’ tell them that the flow of the Jordan was cut off before the ark of the covenant of the Lord. When it crossed the Jordan, the waters of the Jordan were cut off. These stones are to be a memorial to the people of Israel forever.” (Joshua 4:5-7)
Previously, Moses had taught the people, "Remember today that your children were not the ones who saw and experienced the discipline of the Lord your God: his majesty, his mighty hand, his outstretched arm; the signs he performed and the things he did in the heart of Egypt, both to Pharaoh king of Egypt and to his whole country...But it was your own eyes that saw all these great things the Lord has done." (Deuteronomy 11:2-3,7). To prevent future generations from forgetting these acts, the Israelites were to "teach them to your children, talking about them when you sit at home and when you walk along the road, when you lie down and when you get up." (Deuteronomy 11:19). In the oral culture of the time, God's people were to trust him in the future based on what He had already done in the past. This idea is further demonstrated in the Psalms. Both Psalm 78 and Psalm 105 give detailed accounts of how God has protected and provided for his chosen people.
Finally, God provides evidence to prove that He is the only true God. When Moses is called to lead the Israelites from slavery in Egypt, he wonders how he will convince them that the LORD sent him. God provides Moses with two signs - his staff turns into a serpent when he throws it to the ground and his hand changes from leprous to fully healed when he slips it in his cloak. However, God provides a further proof if the Israelites still will not listen: "If they will not believe even these two signs or listen to your voice, you shall take some water from the Nile and pour it on the dry ground, and the water that you shall take from the Nile will become blood on the dry ground.” (Exodus 4:9). After living among false idols for over four centuries, God is going to provide undisputable evidence to his people that he alone is worthy of praise.
When God later afflicts Egypt with the plague of the frogs, Moses agrees to pray that they will return to the Nile. When Pharaoh requests that this occur the next day, Moses responds, "Be it as you say, so that you may know that there is no one like the Lord our God." (Exodus 8:10).
Centuries later, the LORD once again proves that He is the only true God in the showdown between Elijah and the prophets of Baal on Mount Carmel. I suggest reading all of 1 Kings 18 for context, but here is a brief summary. These were dark days in the northern kingdom of Israel and most of the people had forsaken the LORD to worship Baal. Elijah, the prophet of the LORD, challenges hundreds of false prophets to a test to see who is the true God. Each side builds an altar and calls for their God to ignite their sacrifice. Elijah ups the ante and even douses his sacrifice with water three times. The prophets of Baal call frantically to their God and even mutilate their own bodies, but nothing happens. Yet, when it was Elijah's turn to call to the LORD, this is what happened:
Elijah the prophet came near and said, “O Lord, God of Abraham, Isaac, and Israel, let it be known this day that you are God in Israel, and that I am your servant, and that I have done all these things at your word. Answer me, O Lord, answer me, that this people may know that you, O Lord, are God, and that you have turned their hearts back.” Then the fire of the Lord fell and consumed the burnt offering and the wood and the stones and the dust, and licked up the water that was in the trench. And when all the people saw it, they fell on their faces and said, “The Lord, he is God; the Lord, he is God.” (1 Kings 18:36-39). 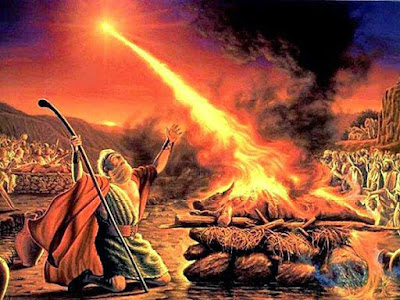 Whether we look at specific usages of the word "faith" or at broad principles that are woven throughout scripture, the conclusion is very clear. The Old Testament clearly teaches that faith is trust or devotion to the LORD and does not call for blind faith in absence of evidence, but instead encourages confident trust based on the evidence of what God had already done to show his mighty power to the nation of Israel. In the next post in this series, we'll examine whether a similar picture of faith carries over into the New Testament.
Posted by Justin Kuk at 2:31 PM