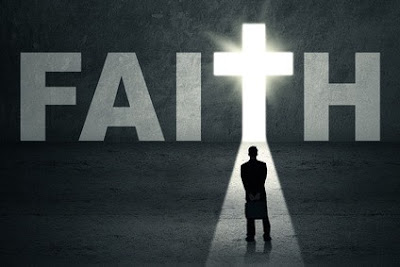 When Peter Boghossian, a philosophy professor at Portland State University, released A Manual for Creating Atheists in 2013, it broke into Amazon's top 100 overall best seller list and shared a blueprint for aspiring anti-evangelists to de-convert the religious. The main message of the book is to sow doubt through asking questions to a believer. One piece of advice that Boghossian gives to readers is that when a Christian or follower of another religion uses the word "faith" during a conversation, the reader should mentally replace the word "faith" with the term "pretend to know things that I don't know."

The book has multiple pages of examples of this tactic. If a Christian says, "I have faith in God", the reader should interpret them to mean, "I pretend to know things I don't know about God." If a Christian says, "Teach your children about faith", the atheists should interpret this to mean, "Teach your children to pretend to know things they don't know." Boghossian even extends his advice beyond the confines of religion, claiming that when a person says, "You have faith your spouse loves you", they really mean, "You pretend to know things you don't know about your spouse's love." Honestly, I find this kind of thinking quite silly, but it is part of a wider narrative from the skeptical community that faith is not based on sound evidence or reasoning.1

This claim is pervasive among the atheist community, particularly in the scoffing culture that infects YouTube, Facebook, Twitter and other online platforms. Richard Dawkins, a leading proponent of atheism says, "Religious faith...is based upon no evidence at all" and that "faith is belief in something for which there is no evidence."2 Eric Murphy, from the radio program Talk Heathen, says, "The best definition for faith that I've read is belief without evidence."3 This representation certainly predates the rise of internet atheism. Betrand Russell claimed, "Where there is evidence, no one speaks of faith. We do not speak of faith that two and two are four or that the earth is round. We only speak of faith when we wish to substitute emotion for evidence."4 This definition for faith is often combined with a heaping spoonful of mockery and can be very rhetorically powerful and persuasive. However, is this an accurate definition of Christian faith?

Now, to be fair, one definition of faith on Dictionary.com is "belief that is not based on proof." This is not the only definition, though. Other definitions given include "confidence or trust in a person or thing", "belief in God or in the doctrines or teachings of a religion", and "the obligation of loyalty or fidelity to a person, promise, engagement, etc." While helpful, none of these definitions ultimately determine what is meant by Biblical Christian faith. When a skeptic is challenging what "faith" means from the Christian perspective, they are providing an internal critique of the Christian worldview. So, while an atheist obviously would not accept the Bible as authoritative, they need to consider how the Bible describes faith instead of choosing their preferred definition from the dictionary.

In this series, I will be supporting the claim that Christian faith is not belief without evidence, but instead is a confident trust and devotion to God based on past evidence. I will be examining a number of texts within the Old and New Testament to support my claim. I believe that this series is important for a couple of reasons. First, it is impossible for Christians and skeptics to have meaningful discussions if skeptics dismiss Christian faith as "belief without evidence" or "pretending to know things you don't know." This view makes it difficult to even make it out of the starting gates or have any mutual understanding. Second, no one should ever be persuaded to leave the Christian faith based on the misrepresentations of faith that I have described above.

This series will include the following posts:

Part 1 - Faith and evidence in the Old Testament

Part 2 - Faith and evidence in the New Testament

Part 3 - Does Hebrews 11:1 describe faith as belief without evidence? Respond to misrepresentations of New Testament teachings on faith

Part 4 - What If I don't need evidence to have faith in Christ?

Part 5 - Why I don't use pre-suppositional apologetics...most of the time

I am really excited to deeply explore the Biblical connection between faith and evidence and hope that this will be a fruitful and informative series for both Christians and non-Christians.