The Great Divide: The Myth of Neutrality 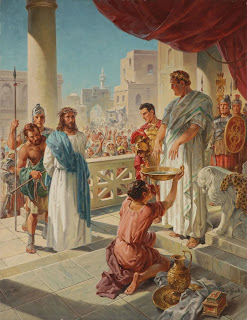 During her senate confirmation hearing, recently confirmed supreme court nominee Ketanji Brown Jackson was asked, “When does life begin, in your opinion?” Jackson initially responded, “Senator, I don’t know,” but when pressed further, she relented, “I don’t know. I have a personal, religious, and otherwise beliefs that have nothing to do with the law in terms of when life begins. I have a religious view that I set aside when I am ruling on cases.”

Jackson’s response reveals a myth that is readily accepted both within and outside the church, that there exists a neutral position from which one can make objective moral, philosophical, and scientific judgments. Such neutrality is a myth. The position does not exist. When Jackson sets aside her religious beliefs to occupy the “neutral” ground of the judge’s bench, she is not operating from the unbiased position that she claims, but is entering a position with godless, humanistic, and naturalistic presuppositions and biases. This neutral position is every bit as biased as the religious worldview that she claims to set aside.

If Christians are going to live faithfully amidst the cultural tumult of the current season, we must both realize and embrace that a position of neutrality does not exist. We will receive praise from the world if we claim to judge political and social matters from an objective and unbiased standpoint. Such praise is hollow and deceptive because we are not entering the presumed neutral territory that we claim, but instead operating from a worldly mindset that is hostile to the law of God and contrary to the mind of Christ. C.S. Lewis brilliantly summarizes this reality: “There is no neutral ground in the universe. Every square inch, every split second is claimed by God, and counterclaimed by Satan.”

It is essential for Christians to embrace this truth for two reasons. First, we must transparently state that we cannot rightly judge from an illusory position of neutrality. When we claim to do so, we deceive both ourselves and the very people we are trying to influence with the gospel of Christ. Second, we must prepare ourselves by recognizing that the world and the spirit of this age will not allow us to remain in a position of neutrality. The incrementalism of humanistic philosophies will eventually force us to choose a side.

The Bible does not describe the disconnected religious and secular spheres that Judge Jackson claims to occupy in her personal and professional life. There is not a square inch of the universe that is not under the authority of God. King David declares,  “The earth is the Lord’s, and everything in it, the world, and all who live in it.” (Psalm 24:1). The prophet Isaiah confirms that because of God’s mighty power not one star amongst the heavenly hosts is missing and that He calls them forth by name (Isaiah 40:26). The New Testament expands on this theme and explains that through Christ “all things were created, in heaven and on earth, visible and invisible, whether thrones or dominions or rulers or authorities - all things were created through him or for him.” (Colossians 1:16). Judge Jackson attempts to assert that, for the Christian, there can be some neutral sphere of existence that is not under the sovereignty of Christ’s lordship. This sphere does not exist.

Furthermore, our minds are either devoted to Christ or conformed to the patterns of this world. The Apostle Paul insists that believers must “no longer live as the Gentiles do, in the futility of their thinking. [Unbelievers] are darkened in their understanding and separated from the life of God because of the ignorance that is in them due to the hardening of their hearts.” (Ephesians 4:17-18). Instead, having come to “know Christ”, believers are to put off [the] old self, which is being corrupted by its deceitful desires; to be made new in the attitude of [their] minds; and to put on the new self, created to be like God in true righteousness or holiness.” (Ephesians 4:22-24). Far from staking claim to a neutral position, Christians are called to have a transformed and renewed mind, which is clearly opposed to the pattern of the world in order that they would be able to test and approve God’s good, pleasing, and perfect will (Romans 12:1-2). It is only by having a mind devoted to Christ and God’s righteous standards that we possess the capacity to make good and righteous judgments and decisions.

Instead of trading a personal, religious position for a standpoint of neutrality, Judge Jackson and many other professing Christians have adopted a worldly and humanistic philosophy that is directly opposed to God’s laws and commands. This position of neutrality is lauded by the world as wise and virtuous, but the Bible clarifies that “although they claimed to be wise, they became fools” and exchanged the glory of God for idolatry (Romans 1: 22-23). Such people do not possess neutrality in their thinking but have been given over by God to “do what ought not to be done” and “approve of those” who act against “God’s righteous decrees.” (Romans 1:28, 32). Thus, claiming a neutral position of wisdom, a professing Christian finds herself unable to answer the question, “What is a woman?”, and unable to stand up against the slaughter of millions of pre-born image bearers of God. No, this is not the neutral position of objective wisdom, it is the foolish position of rebellion against God’s clearly revealed moral law. If we are going to make just and righteous judgments, we must reject any pretense of maintaining a neutral position and instead maintain unswerving commitment to the commands of God and strive daily to devote our minds to Christ.

I believe that such a position is actually more respectful to others than Judge Jackson’s obfuscation. We clearly delineate where we stand. We clearly state our presuppositions and biases. We don’t pretend to be neutral, because a mind devoted to Christ cannot be neutral on moral issues to which God has clearly spoken. Judge Jackson tries to keep a foot in both camps, a mind devoted to God in her personal life and a mind devoted to neutrality in her professional life. This position is neither biblically or logically tenable and will consistently lead to judgments that run contrary to God’s designs, plans, and decrees.

2. The world will not tolerate neutrality

Some may think, “I agree that the Bible clearly condemns abortion and provides clear definitions for sexuality and gender, but I don’t want to get involved in politics or culture wars, so I prefer to just stay out of these debates and focus on sharing the love of God.” While I agree that a Christian’s commitment is not to a particular political party, but to Christ in his kingdom, I would argue that these issues are not political issues, but moral and biblical issues that have been politicized. However, the larger problem with such a position is that the world will not allow one to maintain a position of neutrality. Eventually, incrementalism will force one to betray their true position, either embracing worldly and godless philosophies or standing for biblical truths.

The Apostle Peter warns that unbelievers will not simply accept that Christians have chosen to leave a life of “debauchery, lust, drunkenness, orgies, carousing and detestable idolatry”, but will “think it strange that [Christians] do not plunge with them into the same flood of dissipation and heap abuse on [them].” (1 Peter 4:3-4). I believe that we will increasingly see this play out with the identification and use of preferred pronouns in the coming years. Employees will be directed to include their preferred pronouns in their email handles and Zoom names. Participants will be expected to give their preferred pronouns during ice breakers at professional and community meetings or provide their preferred identification for their name tags at conferences. If someone refuses to participate in such rituals, it will not be interpreted as taking a neutral position but will be viewed as a transphobic attack on LQBTQIA+ community.

This phenomenon recently played out at a neighboring school district in Maryland as district leadership partnered with a LGBT advocacy group to provide pride flags for every elementary classroom in the district. Although teachers were given the “choice” to not display the flag in their classroom, such a decision would not be interpreted as choosing to remain neutral in a sensitive political debate, but as a homophobic refusal to provide safe spaces for queer and questioning youth. Those who support the gay agenda have no tolerance for neutral spaces. They will force you to choose a side and anything less than full affirmation and celebration will be interpreted and construed as hateful and bigoted intolerance.

Neither is it possible to support some aspects of the social justice movement without embracing all aspects of the movement. In an interview with Don Lemon, leading antiracist activist Ibram X. Kendi explains, “To be antiracist is to actively oppose homophobia and transphobia in ourselves and in our society. Whether it’s a homophobic joke from a friend or transphobic policy in our community, aimed at trans women or kids, it is our responsibility to call out injustice.” Obviously, Christians should not engage in hateful or coarse joking (Ephesians 5:4), but when Kendi talks about transphobic policies he is talking about laws that restrict school districts from teaching kindergartners about gender fluidity and policies that prohibit biological men from competing in women’s sports. If you think that you can put a black square on your Facebook profile or a BLM sign in your lawn but remain “neutral” on matters of sexuality and gender, you are sorely mistaken. The incrementalism of the social justice movement, which is rooted in godless neo-Marxist philosophies and identity politics, will not allow it.

To conclude, let us learn from another person who falsely claimed to maintain a position of neutrality in regards to Christ. Pontius Pilate had the power to release Christ, but instead sentenced him to crucifixion, a free will choice that corresponded with the manifold wisdom and preordained plan of God. Attempting to justify himself and maintain a position of neutrality, Pilate washed his hands and said, “I am innocent of this man’s blood. It is your responsibility!” Yet, Pilate was acting in his own self interest and clearly violating biblical justice by condemning an innocent man to die. He was not neutral. Like Pilate, we have all at times abandoned the clear teachings of scripture to support worldly ideas, whether through silent complicity or active promotion. Rather than washing our hands and pretending to maintain an illusory position of neutrality, may we wash ourselves with the sanctifying blood of Christ and devote our minds anew to his gospel, kingdom, and purposes.

Email ThisBlogThis!Share to TwitterShare to FacebookShare to Pinterest
Labels: Worldview