A Trip Around the Worldviews: Postmodernism

I heard the following story while listening to a lecture from Ravi Zacharias on the pursuit of truth in our current culture:


I remember lecturing at Ohio State University, one of the largest universities in this country. I was minutes away from beginning my lecture, and my host was driving me past a new building called the Wexner Center for the Performing Arts.

He said, “This is America’s first postmodern building.”

I was startled for a moment and I said, “What is a postmodern building?”

He said, “Well, the architect said that he designed this building with no design in mind. When the architect was asked, ‘Why?’ he said, ‘If life itself is capricious, why should our buildings have any design and any meaning?’ So he has pillars that have no purpose. He has stairways that go nowhere. He has a senseless building built and somebody has paid for it.”

I said, “So his argument was that if life has no purpose and design, why should the building have any design?”

He said, “That is correct.”

I said, “Did he do the same with the foundation?”1 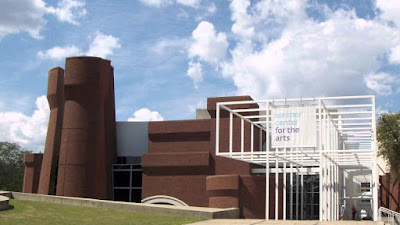 The Foundation of Postmodernism

I fully admit that I am not a professional philosopher and, while I was researching postmodernism, I stopped more than once to ask, “What did that just say?”  I find it to be a very mind-bending philosophy, but will try to communicate the basics clearly and concisely.

Postmodernism rejects the idea that objective, universal truth can be discovered through reason, observation and rational investigation. No person, institution, or discipline is neutral in its pursuit of truth and will therefore always offer an interpretation that is colored by its culture, language, history and gender.  Truth is not something external that we can determine, but is socially constructed through our collaborative interactions.  There is no ultimate “Truth” that corresponds with reality, but there are collective “truths” that are built by each individual.  Postmodern philosopher Richard Rorty puts it this way, “We…[should] give up the correspondence theory of truth (i.e. truth is that which corresponds with reality), and start treating moral and scientific beliefs as tools for achieving greater human happiness, rather than as representations of the intrinsic nature of reality.”2

Language plays a central role in the construction of “truth.”  Jeff Myers explains, “Postmodernists think we cannot know the world directly.  We only know it as we interpret it.  Since our language structures our relationships, our talk about the objects in the world isn’t really about those objects at all: it’s really about ourselves.”3  So when we talk about an object, a moral truth, or a scientific idea, we aren’t talking about something with an objective, concrete essence but are only communicating our interpretation.  Recognizing the role in which language shapes these interpretations, postmodernists hold suspicion about how language is used by the powerful as a tool of oppression to impose ideas on everyone else.  One way this is accomplished is by the crafting of metanarratives, which provide a unifying story about reality.  Postmodern philosopher Jean-Francois-Lyotard encouraged “incredulity towards metanarrative”4 because people’s experiences are too varied to provide a general, overarching statement about the world.

To postmodern literary critics, ultimately, even words themselves have lost objective meaning.  In an essay titled “The Death of the Author,” Roland Barthes argues that the original and intended meaning of the text is not important, rather it is the interpretation of the reader that determines the text’s meaning.  Postmodern literary critics claim that words cannot accurately describe the world.  The writer cannot communicate about reality, but can only communicate about reality as understood by the reader.5

Postmodernism is skeptical of claims that science can provide a neutral, objective description of reality.  Author Nancy Pearcey recounts the following story from a conference on science and postmodernism:

Postmodernist philosophers led off by arguing that “there are no metanarratives,” meaning no overarching, universal truths.  Responding on behalf of the scientists was Nobel Prize-winning physicist Steven Weinberg, who replied: But of course there are metanarratives.  After all, there’s evolution – a vast metanarrative from the Big Bang to the origin of the solar system to the origin of human life.  And since evolution is true, that proves there is at least one metanarrative….To which the postmodernist philosophers responded, ever so politely: That’s just your metanarrative.  Evolution is merely a social construct, they said, like every other intellectual schema – a creation of the human mind.6

Postmodernists claim that our observations are culturally and linguistically influenced and the knowledge that we gain from science cannot describe an objectively true nature.  Terry Eagleton asserts, “Science and philosophy must jettison their grandiose metaphysical claims and view themselves more modestly as just another set of narratives.”7  Objective “Truth” about the origin of the universe, our solar system, and life on Earth is beyond our grasp.

Nothing at all.  In their book on postmodern economics, David Ruccio and Jack Amariglio claim there is “no singular or unique ‘I.””8  Human beings do not possess a personality or human nature.  We do not have souls, but are a “collage of social constructs.”9  Mitchell Stevens explains, “It’s not just that we have different sides to our personality; it’s that we have no central personality in relation to which all our varied behaviors might be seen as just ‘sides.’ We are, in other words, not absolutely anything.”10

From a postmodern view, things, including human beings, don’t have any real, intrinsic essence.  Human nature and value is not something that we can objectively describe, but something that is socially constructed and colored by our unique experiences and cultural perspectives.

According to British essayist Phillips, “Universal moral principles must be eradicated and reverence for individual and cultural uniqueness inculcated.”  Postmodernism denies the existence of any universal morality against which we might judge right and wrong action.  Instead, we must be content to live with what Jean-Francois Lyotard called “little narratives.”  Moral truth is not revealed by a divine being or discovered by reason, but resides within the community.  Each culture and community determines what is moral within its own circumstances and experiences.  This leads to the obvious question, however.  How does one judge between two communities with opposite, incompatible moral views?

Albert Camus once said, “I have seen many people die because life for them was not worth living.  From this, I conclude that the question of life’s meaning is the most urgent question of all.”11  Can postmodernism provide satisfying answers to this question?  The worldview dismisses the existence of any external purpose and meaning for human life that we can apprehend and rejects any metanarrative that would attempt to provide an answer to the question of ultimate purpose.

What we are left with is pragmatism.  Since ultimate meaning and purpose are not “out there” waiting to be discovered, we must generate our own purpose, informed by our experiences and culture.  In other words, each person must discover purpose, meaning, and significance in a manner that works for them.

Probably at this point, you’ve noticed a pattern that postmodernism can’t really provide any answers to the big questions of life.  Based on its own central tenets, postmodernists would deem these answers to be unknowable in an objective sense.  However, metaphysical truth can be discovered in a pluralistic sense, based on preference rather than objective standards.  A person’s claims about eternal matters may be true for them, but they don’t apply to everyone else.

Despite claims of religious plurality, it seems that some postmodern thinkers have no problem rejecting certain metaphysical propositions.  Richard Rorty claimed there was “no room for obedience to a nonhuman authority (i.e. God)” and endorses “forgetting about eternity.”12  Matters of heaven, hell, sin, and salvation compose a metanarrative that has been used by institutions to control and oppress.  The very idea of God has been socially constructed through language.  “God is a projection.  When children have problems, they run to their father for protection.  When adults have problems, they project their earthly father into the skies, and they run to this entity for comfort.”13

Although reading about postmodernism sometimes feels like swimming in the philosophical deep waters, it seems to me that a person can refute the worldview without needing to graduate from “swimmies.”  The worldview is self-defeating, which can be shown with simple logic.  Postmodernism claims that there is no universal truth that can be known, but in doing so, makes a truth claim of its own that should be universally accepted.  By rejecting all metanarratives, aren’t postmodern philosophers building their own metanarrative that there are no metanarratives?  Postmodern literary critics assert that the words of the author have no objective meaning; instead, it is the interpretation of the reader that has meaning.  Yet, I suspect that when these critics write books expressing this view they expect that the reader will be able to understand the message they are trying to communicate.  If a student completely misinterprets their message, would they correct them or be satisfied that the student had constructed their own meaning?

To be charitable, I do think that postmodernism does raise some valid concerns, but takes them too far.  We should be humble about the limits of our own knowledge, but that does not mean that truth is unknowable or does not exist.  It is worthwhile to recognize how own life experiences and culture impact our own beliefs and pursuit of truth, but again, this does not mean that we are unable to perceive that which corresponds with reality.

I want to return to the opening example of the Wexner Center for the Performing Arts, the postmodern building at “The” Ohio State University (a little joke for Michiganders, there).  The architect felt the liberty to do all sorts of cute tricks with the building: false stairways, purposeless rooms, meaningless pillars.  Yet, he didn’t dare do the same thing with the foundation that supported the building, but recognized its objective function and purpose.

In the same way, I feel that postmodernism plays a lot of cute, fancy words games while discussing the big questions of life.  Yet, do they really live out their worldview?  If we were standing in a road and a truck was hurdling towards us, would they say, “That’s just your opinion” if I warned them to move from its path?  When they take a flight, do they want the pilot to trust that the instruments on the control panel are providing information that conforms with reality or would they rather the pilot construct their own truth?  When the rubber meets the road, postmodernists do live as though objective truth does exist.

More than that, what would happen if we were to build the superstructure of human civilization on the foundation proposed by postmodern philosophy?  We would be left with a foundation in which there is no intrinsic human nature or value, there is no standard by which to judge moral decisions, and there is no ultimate purpose or meaning to human life.  I hope that humanity never needs to rise from the rubble that would ensue.

11)  Gablik, Suzi. “Postmodernism and the Question of Meaning. https://msu.edu/course/ha/452/gablikpostmodernism.htm