A Trip Around the Worldviews: Marxism 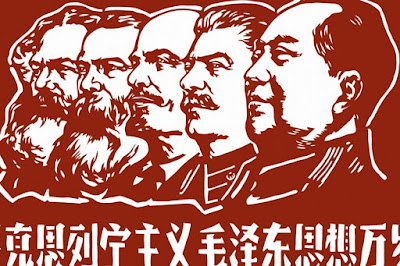 When I started research for this series, I was surprised to see Marxism identified as one of the major competing worldviews. “Didn’t the Cold War thirty years ago?” I thought to myself.  This might be a commonly held perception, but as a worldview, Marxism is very much alive and influential.  Thanks to China’s large population, the world’s five communist countries (Chine, Vietnam, Laos, North Korea, and Cuba) account for approximately one-fifth of the world’s population.  North Korea’s implementation of Marxism certainly influences world politics disproportionately to its small size.  Additionally, there are a number of other nations in which socialism is either the official policy (Bangladesh, India, Sri Lanka, Portugal, Tanzania, Guyana) or exerts strong political influence (France, Greece, Venezuela, Sweden, Zambia, Syria, Norway, etc.)1 Finally, a number of rebel groups around the world are motivated by Marxist ideas.

Clearly, despite the perception that Marxism ran out of fuel in the 20th century, it is a worldview that remains relevant in the present day and we should understand both its foundational beliefs and implications.  This would be a good place to remind readers that this series is an analysis of ideas, not individuals.  For example, advocating for universal health care does not make someone a Marxist or imply that they support the implications of a Marxist worldview.  Nonetheless, as we engage in the present culture, it is important to understand how ideas emerged, what consequences they bore in the past, and where they could possibly lead in the future.

Probably when many people think of Marxism, images of cool, rebellious T-shirts with a face of Che Gueverra or a raised fist come to mind, but to truly understand a worldview we must dig down to its foundation.  Based upon the writings of Karl Marx and Friedrich Engels, Marxism is built upon two main ideas: dialectic materialism and economic determinism.

Dialectic materialism, which was based upon a view of history developed by German philosopher Georg Wilhelm Friedrich Hegel, describes the cyclical process in which the status quo, or thesis, triggers a reaction, or antithesis, whose goal is the negation of the status quo.  After conflict between the thesis and antithesis, a new view emerges, which is called the synthesis and is a merging of ideas from the thesis and antithesis.  Overtime, the synthesis becomes the new thesis and the cycle repeats again.  In this way, history is a continually upward spiral towards a better way of thinking and a more just society and conflict is an important part of this inevitable process.

Friedrich Engels wrote, “In every historical epoch the prevailing mode of economic production and exchange, and the social organization necessarily following from it, form the basis upon which is built up, and from which alone can be explained, the political and intellectual history of that epoch.”2  In other words, economics explains everything else.

This is the idea of economic determinism.  In this view, everything in history can be explained by an economic struggle between the bourgeoisie, the property owners, and the proletariat, the property-less workers.  The bourgeoisie and proletariat are engaged in a dialectic struggle that will eventually lead to the ultimate synthesis, a communist society in which all means of production are held in common and there is no exploitation or injustice.  This is the evolving course of history that cannot be stopped.

Related to both of these pillars, materialism and atheism are central to the Marxist worldview.  According to Engels, “In our evolutionary conception of the universe there is absolutely no room or either a creator or a ruler.”3  As we answer life’s big questions, we will see that this foundational belief results in devastating implications.

Upon reading Darwin’s Origin of Species, Karl Marx immediately believed that his view of economic evolution and Darwin’s theory of biological evolution paired together perfectly.  Not only did the theory remove the need for a creator, but it mirrored his understanding of progress through conflict.  He wrote, “Darwin’s [Origin of Species] is very important and provides me with a basis in natural science for the class struggle in history.”4

However, early Marxist leaders came to realize that the gradual evolution described by Darwin did not comport with the dramatic revolutionary leaps predicted by Marxism.  Instead, the theory of punctuated equilibrium, which proposes short periods of dramatic biological change followed by long periods of stasis, better fits the Marxist view of economic progress.  In fact, two of punctuated equilibrium’s strongest advocates, Stephen J. Gould and Niles Eldredge, acknowledged that Marxist philosophy was not “irrelevant to [their] personal preferences [for punctuated equilibrium over gradual, natural selection]” and that Gould “learned his Marxism at his daddy’s knee.”5

Most important for Marxist, philosophy, however, is that humanity did not originate from the purposeful act of a creator but through natural, unguided processes.

As discussed in the investigation of secular humanism, how a worldview answers the question of origin drastically affects how it answers the question of human identity.  Humans are not made in the image of God, with inherent value and dignity, but are simply matter in motion.  As Marxist scientist A.I. Oparin claimed, “We have every reason to believe that sooner or later, we shall be able to practically demonstrate that life is nothing else but a special existence of matter.”6

Although humanity is really nothing more than matter in motion, class distinction is important in the Marxist worldview.  The bourgeoisie, or land and property owners, are the class that is responsible for injustice, oppression and exploitation.  The proletariat, or working class, provide the labor necessary to produce the goods of a society and are oppressed by the bourgeoisie.  A person’s place in this class system will dictate answers to questions of morality and meaning.

Marxist philosophy encourages growth in class consciousness, the awareness of the proletariat that they occupy the low position in society and are being exploited by the bourgeoisie.  Class consciousness promotes a proletariat morality, an ethical system in which the “ends” of actualizing a communist society justify the “means” by which it is achieved.

According to Scientific Communism: A Glossary, “Devotion to the cause of the working class, collectivism, mutual aid, comradely solidarity, hatred toward the bourgeoisie and toward traitors to the common cause, internationalism, and stoicism in struggle are traits which not only define the content of proletarian ethics, but also characterize the moral image of the typical representatives of the working class.”7

Fervent Marxists openly admitted their view that killing the bourgeoisie was a basic moral duty.  M.Y. Latsis, a top official of Lenin’s secret police, asserted “We are exterminating the bourgeoisie as a class.”  Nikita Khrushchev, president of the U.S.S.R, admonished, “Our cause is sacred.  He whose hand will tremble, who will stop midway, whose knees will shake before he destroys tens and hundreds of enemies, he will lead the revolution into danger.  Whoever will spare a few lives of enemies, will pay for I with hundreds of thousands of lives of the better sons of our fathers.”8

While we may lack purpose endowed from our creator, we do find ourselves as players in the great economic struggle that has raged throughout history towards the evolution of the ideal, communist society.  As members of the proletariat grow in consciousness of their oppressed status, they are called to join the conflict against the bourgeoisie.  This calls for fully giving oneself to the common good of achieving the classless society.  Members of the bourgeoisie can either surrender their right to private property and join the common cause or suffer the consequences.

True Marxists are strictly atheistic.  As Chou En-lai, the first premier of the People’s Republic of China, succinctly declares, “We Communists are atheists.”11  This is a view that has been consistently held by Marxists leaders throughout history.

Furthermore, Marx viewed religion as one of the tools the bourgeoisie used to control the proletariat.  He explained, “Religion is the sigh of the oppressed creature, the sentiment of a heartless world, as it is the spirit of the spiritless condition.  It is the opium of the people.”12  Marx sought not only to free the proletariat from economic oppression, but from the desire to seek salvation and eternal life.  After all, “life is nothing else but a special form of existence of matter.”

This investigation of Marxism is not political in nature.  It is not my goal to promote conservative political views or to condemn liberal political views.  I am also not insinuating that people who lean to the left embrace the ideology described in this post.  Instead, the goal of this post is to explore the foundations and implications of the worldview laid out by Karl Marx and Friedrich Engels, a worldview that drastically altered the world in the 20th century and continues to exert major influence today.

I affirm and applaud the desire to bring freedom and justice to the oppressed and exploited people of the world.  For those who are drawn to Marxist philosophy for that   reason, I recognize that as a right and noble desire.  When we examine the Christian worldview, it will have something to say on the topic.

However, there is no way to soft way to deliver my conclusion.  Instead of leading to and a utopian society, Marxism brings harsh, cruel violence and tyranny.  It is a worldview in which the ends justifies the means, allowing Lenin to say, “Even if for every hundred correct things we committed 10,000 mistakes, our revolution would still be – and it will be in the judgment of history – great and invincible.”14  Such a worldview permitted Lenin to view Ukrainian farmers (kulaks) not as “human beings”, but as objects of “economic terror,” a view that Joseph Stalin acted upon on December 27, 1929 when he announced “the liquidation of the kulaks as a class.”15

One might say, yes, in its implementation Marxism has resulted in atrocities, but in theory it is a good system and worldview.  After all, don’t other worldviews have atrocities to answer for?  Doesn’t Christianity, for example, need to answer for the Inquisition and the Crusades?  To answer these questions, we must look at the foundations and implications of each worldview.  Christianity will be explored in detail later, but as for Marxism, it demands violence and despotism.  In The Communist Manifesto, Marx writes, “The Communists disdain to conceal their views and aims.  They openly declare that their ends can be attained only by the forcible overthrow of all existing social conditions”.  He continues, “Of course, in the beginning, this cannot be effected except by means of despotic inroads.”16

When we examine the foundations and implications of Marxism, the results in the 20th century were predictable: the loss of millions of lives through hate driven violence.  It is important to guard against the Marxist worldview so that our children and grandchildren do not see the same wake of carnage when they look back at the 21st century.