Thus far in this series on evangelism, I have outlined a Biblical definition for evangelism, discussed whether all believers are called to share the gospel, and provided reasons why we can rejoice in the task of evangelism.  Even if you have been nodding in agreement the entire time, you might be wondering how one practically goes about sharing the gospel.  Even if someone has a desire to share their faith, how do you even get the conversation started?  In my experience, starting the conversation is the most difficult step, whether you are talking to a longtime friend or a complete stranger.  However, I have found that once the ball is rolling, the conversation flows relatively easily, and have gone on to have deep, extended conversations with complete strangers.

The reality is that there is not one cookie-cutter method for sharing the gospel, but I would like to share a method that I have found to be effective.  It is an approach that has Biblical precedent in the early church and I have dubbed it the Isaiah 53 Method.  In Acts 8, the Apostle Phillip encounters an Ethiopian eunuch on the side of the road.  Led by the Holy Spirit, Philip approaches the high ranking official, who is reading Isaiah 53:7-8 from a scroll.

"He was led like a sheep to the slaughter,
and as a lamb before its shearer is silent,
so he did not open his mouth.
In his humiliation he was deprived of justice.
Who can speak of his descendants?
For his life was taken from the earth."

The Ethiopian did not understand the meaning of this passage, which prophetically speaks of the suffering that the Messiah would endure to "[bear] the sin of many" and "[make] intercession of the transgressors" (Isaiah 53:12).  Using this prophecy as a launching point, Philip "began with that very passage of Scripture and told [the Ethiopian] the good news about Jesus" (Acts 8:35).  The Ethiopian believed the gospel, was baptized, and returned joyously to his homeland, where he likely spread the gospel and sparked the formation of the Coptic Church, which exists to this day. 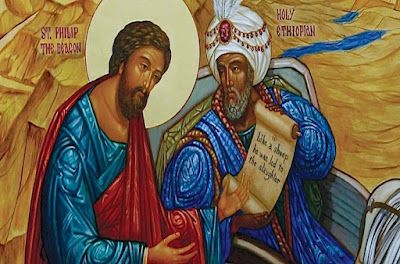 I like to start with the passage that just precedes the one that Philip used to explain the gospel to the Ethiopian.  Isaiah 53:3 – 5 says:


He was despised and rejected by mankind,
a man of suffering, and familiar with pain.
Like one from whom people hide their faces
he was despised, and we held him in low esteem.
Surely he took up our pain
and bore our suffering,
yet we considered him punished by God,
stricken by him, and afflicted.
But he was pierced for our transgressions,
he was crushed for our iniquities;
the punishment that brought us peace was on him,
and by his wounds we are healed.

During the past year, I have been using this passage to share the gospel with students at Johns Hopkins University in Baltimore.  Once or twice per month, I have spent a couple hours walking around campus and seeking to initiate gospel-centered conversations.  I approach a student and ask them if they have a few minutes to answer a couple questions.  I then ask them to read the passage, which is printed on regular paper, and identify who the passage was written about and when it was written.  So far I have spoken with forty students and, being a mathematical-logical thinker, I have tracked how students have responded to the questions.   As you can see from the data below, the majority of students identified that the passage was written about Jesus, but they thought it was written in the New Testament or after the events of the crucifixion.  Some students didn’t know who the passage was about, but when I told them that it was about Jesus, almost everyone predicted that it was written after his death.  This means approximately 90% of students believed that the passage was written looking back on the events of the crucifixion.  If Christianity was a myth or merely developed over time, this is what one would expect, especially since the passage so closely matches traditional Christian teaching about Jesus.  When I reveal that the passage was actually written over 600 years before Jesus was born and well before crucifixion was even invented, there is a moment of surprise.  One student even exclaimed, "Oh s#*%!".  In reality, the heart of the Christian message was prophesied well in advance.  What could this mean? 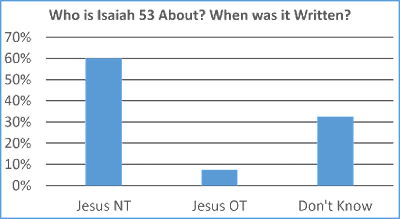 This is where there is an opportunity for a paradigm shift.  Instead of me “forcing my beliefs on them,” this is a moment of self-realization that there might be something more going on here.  From that point, I ask them what they think the passage means and this provides an opportunity for a clear presentation of the gospel.  The heart of the gospel is embedded in this passage: Jesus was pierced for our sins and this sacrifice is what brings us peace with God.  A conversation may go many directions from here, but I always try to give a clear presentation of the gospel.  This often involves drawing out the meaning of "transgressions" and "iniquities" and showing that on the basis of the law, we are all in desperate need of a savior.   In order for the gospel to be good news, we need to realize the depth of our sin and our standing before a holy God, apart from the saving work of Christ.  For an example of how to use the law to highlight our need for Jesus' sacrificial death, I recommend viewing videos from Living Waters, such as the one below.

To end the conversation, I often ask students if they have ever taken time to investigate or seriously consider the claims of Christianity, that Jesus died for our sins and rose again from the grave to prove the efficacy of this sacrifice.  If they are willing, I give them a copy of More than a Carpenter by Josh and Sean McDowell, which gives an overview of several reasons why we can have confidence that Jesus did rise from the grave and is the Son of God.  In the book, I write my contact information so they can reach out to me after they have finished the book if they are interested in continuing the conversation.  I also like to share a favorite quote from C.S. Lewis: “Christianity, if false, is of no importance, and if true, of infinite importance. The only thing it cannot be is moderately important” and encourage them to seek out the truth about Christ.  If Jesus did truly die for our sins and rise from the grave, their response to this truth is infinitely important.  If he did not, then the conversation we just had means nothing.

By no means is this the only method of starting a gospel-centered conversation, but one thing I like about it is that it doesn’t put the person on the defensive like other approaches might.  The “aha moment” is coming from them, not from me.  I have never had a conversation turn confrontational and have had numerous deep and enjoyable conversations.  The worst outcome is that a couple people have handed the paper back after reading the first couple lines and walked away.

If you have a desire to share the gospel and are unsure how to get started, I encourage you to give this approach a try.  If you do, I'd love to hear about it in the comments section below.
Posted by Justin Kuk at 6:38 PM

Email ThisBlogThis!Share to TwitterShare to FacebookShare to Pinterest
Labels: Evangelism